Aulis is traditionally located in Greece, near and around two small round harbor basins at the isthmus of Chalkida, but the location is quite cramped for a thousand ships. The smallest basin has a diameter of 300 m, the largest 600 m. Here also is not enough fresh water for so many people. Another reason to bring out the fancy poet Homeros to ridicule him for exaggeration?

The largest of the two basins at Aulis in Greece, with a mooring space of about 2000 meters

Ruins of the Artemis Temple at Aulis, Greece.

An alternative Aulis was suggested by Wilkens (2007), who believes that Troy was in the peneplain of Cambridge. For this idea about Troy I cannot yet find enough evidence in the field, but I should spend more energy and time on this idea. The alternative Aulis would have been in Denmark, a secret place from where it was possible to cross over to England relatively speedy.

Wilkins supposes the assembled fleet was headed for the Wash in England, and for a speedy crossing of the North Sea an Eastern wind is best. This is to be expected in early springtime in Northern Europe, but for Agamemnon it was an anxious waiting, too long to keep the moral high with so many thousands of people preparing for war, with little discipline. And the Cyclic Poems legend says he made the mistake to go hunting in the holy forest reserve and got trouble with Artemis.

The collateral idea is that the Danaioi were Danes and that Crete was, in fact, Danmark, which indeed could have had 90 settlements at the time, as Homeros says. Historians assert that Danmark was very rich in the Bronze Age, and later on still so, having plenty of excellent, fertile, ploughland and pasture land. Excellent land and climate for big cattle. Drinking cups and other expensive tableware made in Mediterranean shops have been found (in tumuli) that surpass what has been found back in Pompeji. It was heavily peopled with various tribes since early times. The late Romans are reputed to have denounced this region as the “womb of many nations”, producing destructive waves of emigrants in unhappy times.

The problem with state forming in Denmark in later Medieval times was that all those nearly hundred settlements were provided with excellent harbor facilities for flat-bottomed ships, well sheltered, and linked with the open sea. No differentiating was reached by competition, until first Roskilde, and finally Copenhagen was selected by the king and made into the foremost city.

I wonder if Crete in Greece would have had so many people and so many flourishing settlements in the Minoan period of time. It is a poor and rocky island for the most of it, with only a few natural harbor facilities. Its main port was probably Santorini island. What product or trade made them so rich?

To seek for Aulis I have been in Jutland, and a plausible location is indeed at Nissum Bredning, where an ancient bay near Skibsted Fjord, the bay of Doverodde, has given shelter to ships since times immemorial, at least since the Neolithic when flint was worked here in masses. The bay is now silted up and filled with peat because a cross-dam was built. Some four kilometers of mooring space is available already in the bay only, and outside still more, up to ten. A rich water spring is present in the bay, coming from a boulder clay formation on the plateau, which has provided many erratic boulders at the surface, nowadays largely used up for dolmens and for more recent purposes. Many boulders also have been simply buried by farmers to clear the land. The area is now a forest reserve, mainly planted with conifers. See the map in Fig…. and the photo of the brook in Fig… The landscape around was already deforested for agriculture and pasture during the end of the Bronze Age, and there is room for many thousands of tents and huts on the shores.

In my opinion, Homeros uses epithets to specify situations. What specific purpose would it have to call a rocky region as Aulis in Greece, to be rich in stones? No contrast is present in such a description. But erratic stones in great numbers on a boulder clay plateau dating from the last Ice Age, with a landscape of sweeping green grassy hills of loam soils around, that makes sense to call the area stony. Boulders, mysterious boulders, of various types of stone, where no live rock is present and nowhere seen or found. How these boulders arrived here is only known since the nineteenth century. I thus use as translation: Aulis with its boulders.

If any proof of Troy-near-Cambridge is sought, this possible Aulis site should help clear things up.

A thousand ships full of unruly and quarreling warriors must have left some refuse, also including bronze items, in the bottom slick of the bay. Searching for metals without digging is actually well possible, but needs a permit of course. Remnants of old silex-working sites are near this bay.

The actual narrow exit to the North Sea of this Limfjord complex, the Tyboran Kanal of the Nissum Bredning, is again open, after having been blocked for some ages by sandbars. Western winds are quite unfavorable to pass this exit for sailing vessels, and the “Agamemnon fleet” is reported (not by Homeros) to have been forced to wait many weeks for favorable weather. The harbor bay itself is very hidden and can easily be protected from spies by watchmen on surrounding coasts, summoning ships with armed guards to capture a spy.

Google image of part of Jutland. Doverodde area is at about the center of the image

The splashing brook that flows down to the beach of the sheltered bay starts from a little clear pool, full of dead leaves, near the top of the slope to the plateau. Some twenty meters above that source, on the windy plateau, still do grow solitary oaks with flat and wide crowns, shorn by the sea wind and the grazing animals. Such trees Homeros may have meant with “plataniston”. No need to stick to the Mediterranean plane tree (Platanus sp.) which is commonly thought to be the correct translation (derived from its broad leaves?). The stone altar will have been destroyed in the Christian era. The many tumuli and also some long barrows present in the nature reserve area, several of them quite near to the location of the source, have been respected, fortunately. It clearly was a holy place since long.

The dam in the Doverodde bay, with the peat formation visible in the right upper corner.

A broad wind-shorn oak treelet at Doverodde, and in the background one of the many tumuli

Homeros tells about a big snake that “showed” the seer Kalchas that the war would end in the tenth year, by devouring eight young fledglings and their mother bird in full view of the crowd of leaders. This blood-red snake (the Homeric word is “dragon”) came from under the altar, on which a fire must have been burning. This altar, a dry stacked stone structure, was built above a spring and situated under a spreading tree (as I do translate the word “plataniston”). The snake may have been an Asclepios snake. This holy snake species (Elaphe longissima) is known to have been present in Denmark until the mid-nineteenth century, last seen around 1863 (Hvass, H. 1958). Thus it even survived the Small Ice Age in Western Europe, a feat to notice. The species probably was dispersed by priests since the early Bronze Age, by transporting the egg stage. This snake climbs very well, grows to more than a meter, sometimes even two meters in length, it specializes on birds as food, is not so shy, and has brown-red color, sometimes a lighter hue, giving the impression of recently curdled blood, so familiar to soldiers. Again it can be said that this snake episode could have been well possible in Denmark. And the scene will have been in spring when plenty of young birds are there. Spring is also the best time to start an invasion overseas.

The deer killed by Agamemnon in the holy forest was most likely a roedeer, a species living solitary in many a small woodlot, all over Europe. Agamemnon may have spotted the roedeer outside, on a bow-hunt early in the morning, and could not hold his draw when it nearly escaped in the holy forest, which he must have known to be forbidden to enter at a hunt. Agamemnon showed more of such lack of control in the Ilias, at various occasions. This episode is reported to have been during the delay at Aulis, but Homeros is silent about it. The subject was elaborated in the Cyclic Poems and later literature and tragedies.

The brook before it descends the slope of the Doverodde bay 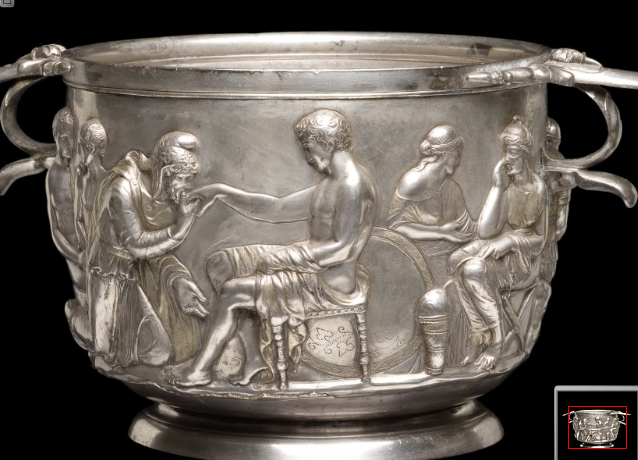 The silver vessel found in a tumulus at Hoby, Denmark, 1st century AD, made in Italy. King Priamos in the hut of Achilles, kissing his “manslaying hand” and Briseis sitting behind Achilles. The vessel has a separate and undecorated insert, to facilitate cleaning. Content is about a liter of fluid.

At the shores of Skibsted Fjord

Lots of boulders, from diverse provenances brought together by the ice cap.